The Breakers, A Tribute to Tom Petty

Name: The Breakers, A Tribute to Tom Petty
Time: 5:00 PM - 9:30 PM EDT
Website: https://www.etix.com/ticket/p/6129024/the-breakers-a-tribute-to-tom-petty-great-barrington-ski-butte
Event Description:
The Breakers, A Tribute to Tom Petty Summer Stage at Ski Butternut Saturday, September 17th, 7:30pm (Gates at 4, Opening Act: 5:00pm, The Breakers: 7:30pm) Ski Butternut, 380 State Rd Great Barrington MA Tickets: $24 Info: 413-330-9367 - Josh@jjkproductions.com If you want to experience Tom Petty & the Heartbreakers music there's only one band that can deliver that sound authentically... There's something happening...something rock n' roll, something the millions of Tom Petty and the Heartbreakers fans around the world need right now more than ever, and it’s The Breakers. The Breakers are a no frills rock band who meticulously encompass the Tom Petty sound and musically establish an emotional connection with the crowd that’s palpable. When asked why they didn’t take the impersonation and prop-driven approach, founder Tom Smith says “we wanted to approach the tribute genre as a true live band, and in (lead vocalist) Chris Chartier we have what no one else has - the most genuine sounding Petty experience in the country.” The members of the Breakers all come from a background of recording and touring with original bands and perform the music of The Heartbreakers with the same passion and dedication. They have paid tireless attention to detail to each and every song which appeals to both casual and diehard Tom Petty fans alike. Since the fall of 2018 when Tom Smith, Chris Chartier, Evan Smith, Rick Hiller, Tom Booth and Steve George joined forces, they have been practicing and honing their sound. In May 2019, they posted a homemade video compilation to YouTube which in just a few months had over 12k views. A family friendly event, attendees are invited to bring their own chairs and blankets. No outside food or beverages allowed on sight. The concert will happen rain or shine.
Location:
Ski Butternut, 380 State Rd Great Barrington MA
Date/Time Information:
Saturday, September 17th, 7:30pm (Gates at 4, Opening Act: 5:00pm, The Breakers: 7:30pm)
Contact Information:
413-330-9367
Send an Email
Fees/Admission:
24
Set a Reminder:
Business Directory News Releases Events Calendar Hot Deals Member To Member Deals Marketspace Job Postings Contact Us Information & Brochures Weather Join The Chamber 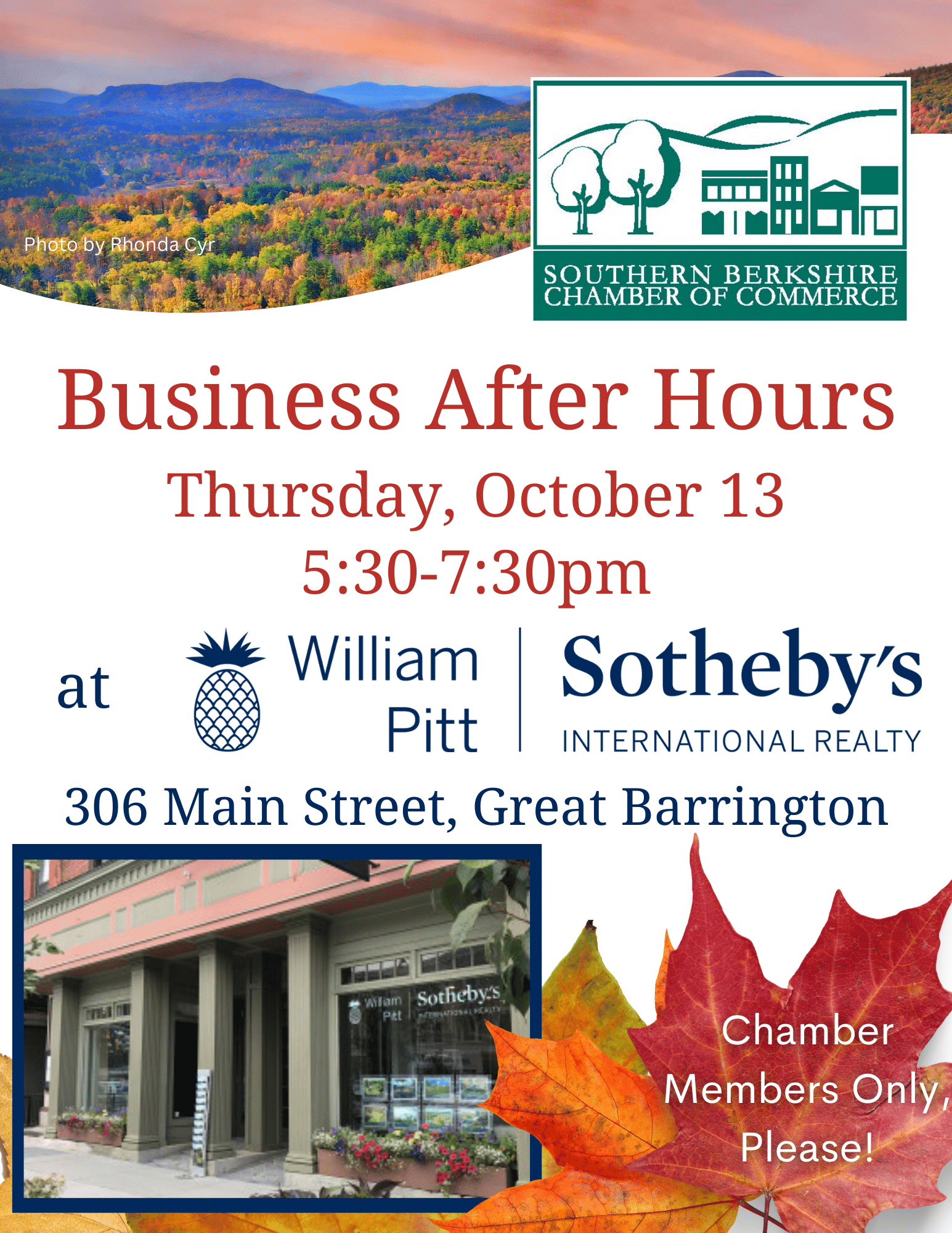 Members are invited to join us for the October BAH at William Pitt Sotheby’s International Realty on Thursday, October 13 from 5:30 to 7:30 pm.
View Calendar
Add